Have you heard other STPs and training officers mention electives and not sure what they are? The elective rotation or just elective is a fantastic opportunity to leave your department for 4-6 weeks, go learn something new, experience a different environment and broaden your horizons. This can be anywhere in the world ( might depend on department and your finances) or it can even be down the corridor in a different department. The world is your oyster as they say.  Last week I started my elective and decided to share my experience with you. Hopefully, I can give you a weekly roundup of what I’ve learned and some cool pictures of all the new places I visit.

So where am I?

I was extremely lucky to be able to arrange an elective at the Broad Institute of MIT and Harvard in Cambridge, MA. So this is the Cambridge in the USA, which makes things funnily confusing when I tell people I live in Cambridge, the original Cambridge, Cambridge-Cambridge. The Broad is a non-profit biomedical and genomic research centre that was born through many collaborations between scientists in MIT, Harvard and the Whitehead institute when genomic medicine was at its infancy and can now be considered one the leading institutes for genomic innovation. The Broad develops a lot of the tools we use in bioinformatics as well as resources used for variant analysis such as the Integrative Genomics Viewer and the gnomAD database.

What I am doing here?

Last year, I attended their GATK training workshop in the UK, halfway through the workshop I was like, what if I ask them if I can go. Never hurts to ask right? So I gathered up all my courage and went up, talked to one of the trainers and their answer was; “Yes, of course, we can organise something”. So a few months later, I was skyping with a lady from the broad discussing projects. Initially, they thought I could go for 3 months, but sadly I could only do 6 weeks which narrowed down the project options. Finally, we decided on a project to attempt to quantify sequencing variation. Samples from the same patient/cell line would be sequenced using different prep chemistry and in different flowcells and the data will be analysed with minor tweaks to the pipelines. She said it sounded boring, to me it sounded like an opportunity to learn.

It has already been a week, how time flies. It is my first time in the US so I was a little bit stressed, to begin with. Flew to Boston in the weekend, and I was lucky enough for it to be a bank holiday on the first Monday. That gave me two days to try and acclimatise with the new time zone. Waking at 6am every day would not be my thing.  In general, Boston is a little bit expensive. Like going to the supermarket is an interesting experience. I never thought I would pay $3 for celery, seems a little excessive. But their salaries should hopefully match the price of living.

I was lucky enough to find a room to sublet from an ex-Broadie and her husband.  They are both lovely, and the commute is only 20 minutes by public transport or 20ish minutes cycling. My first day was just orientation, got to meet other people starting at the Broad and got a tour of the facility. They have 4 buildings, one of which has 11 floors, all filled with people working towards solving some kind of biomedical/genomic problem. Day 2 was my official start day. My project is with the Data Science Platform team (or DSP), and my lovely supervisor Laura explained the first steps of what I would be doing.

The working environment is quite relaxed here, with flexible hours and a chill dress code, I was able to feel like home quite quickly. The nearby Broad building has a resident barista, where you can go grab your free coffee daily, what a treat. The week went on easily, just working on my project, having morning catch-ups with Laura and attending some meetings. One of those days, I was able to sit in one of the DSP group meetings and someone suggested changing the read-haplotype likelihood matrices to a paired read-haplotype one, slightly increasing specificity. Some interesting conversation. It is so wonderful listening to people talk about algorithms and tool specifications with such ease. I definitely learned a lot in just an hour and in general learned a lot this first week.

The weekend arrived and it was time for exploring. I headed to Boston and did part of the Freedom Trail, a 2.5-mile-long path through downtown Boston that passes by 16 locations significant to the history of the United States and marked largely with brick. Got to learn a bit about US history and it was quite interesting. There was also a Greek Festival near where I’m staying (what a coincidence), so got to go, eat some greek food and chill listening to greek music. Here’s a sneak peek in pictures of my week. 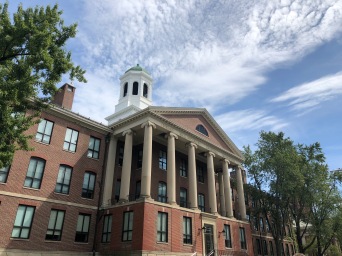 Overall, I have rather enjoyed my first week and I am very excited for the rest of my elective. Hopefully, I can share my week 2 experience next week.

Till then, thank you for reading.

P.S. Anyone that has been to Boston and has suggestions of this to do or see, please let me know.

I am a trainee Clinical Bioinformatician based at Addenbrooke's Hospital in Cambridge. I am all for increasing genomics awareness in and out of healthcare and interested in bioinformatics and cancer genomics. View all posts by Adriana