Every year TEDxNHS is over-subscribed. You fill out a form on their website with a statement of intent and you send it off expecting never to hear back. A few weeks ago, this TED super-fan was lucky enough to attend TEDxNHS 2018 ‘Shaping our legacy’. If morale is ever low or you question why we do what we do, I would prescribe these talks. Special mention to Dr. Charlotte Kemp for being the first Healthcare Scientist to grace this TEDx stage. NHS staff will soon be able to access the videos at https://www.tedxnhs.com/ but in the meantime, here are 5 of my take-home messages from the event:

The beliefs we hold as a society can unfairly disgrace and devalue those within it. We all know stigma has no place in healthcare and the following talks showed the steps we can all take towards a zero-stigma NHS.

Prof. Jane Anderson began her talk with jaw-dropping statistics on HIV: a 14-country study reported 77,000 acts of condom-less sex between an HIV positive male and an HIV negative partner with no viral transmission [1]. Life expectancy after an HIV diagnosis is now as close to ‘normal’ as it’s ever been, but the only route to zero infections, is zero stigma. HIV stigma and discrimination in the UK prevent people from accessing healthcare out of fear, and cause 1 in 5 carriers to feel suicidal [2]. Prof. Anderson closed with a reminder that we are the NHS, and getting to zero starts with us.

The stigma surrounding mental health has an equally harmful legacy. Males between the ages of 20 and 24 are a high-risk group for suicide and to address this problem, Alex Welsh’s team (@TheLPFF) started the ‘Coping Through Football’ initiative. It’s a successful demonstration of  sport as medicine. Thanks to the mentoring relationships built between coaches and players on the pitch, 44% of people on the program found employment and education in 3 years. Hannah Thornton also spoke about the far-too-common and difficult experience of loneliness. Her story of a note left for two strangers on a train sparked a national conversation. She encouraged the audience to champion four words to create a happier, healthier, nation: ‘Hello, I see you.’

It’s easy to think we have to move mountains to make a difference, but a number of talks at TEDxNHS proved otherwise. Andi Orlowski shared a lesson from the American criminal William ‘Slick Willie’ Sutton who, when asked why he continued to rob banks, said “because that’s where the money is”. Andi’s message was clear: focus on the obvious. To have the greatest impact as a health economist, he finds interventions for the 1% of the population who account for 32% of the NHS’s healthcare costs [3].

Hannah Burd from the Behavioural Insights team described how simply switching the colour of a computer screen could reduce pain and waiting times for patients. It sounds like magic, but she proved it. Her team makes small, systematic changes to find those with the best behavioural outcomes. By highlighting nearby short-wait services in an e-referral system, they were able to reduce the burden on struggling hospitals by a third.

As a pharmacist, Dr. Diane Ashiru-Oredope is well-aware of the way current practices are propelling us to a future without antibiotics. It’s estimated that by 2050, 10 million people a year die as a result of antimicrobial resistance [4]. Dr. Ashiru-Oredope promoted the Antibiotic Guardian campaign, which allows members to make a public pledge towards responsible use of antibiotics. For health professionals this means checking that prescriptions meet guidelines and properly communicating how to take them every time. To date, there have been 61,000 pledges, working to raise awareness and a change in practices.

Two presentations made flawless cases for patients as innovators. Michael Seres is a patient with a remarkable story. Diagnosed with Crohn’s disease at age 12, it wasn’t until recovering from a life-threatening intestinal transplant that he began educating the world about his disease. A poor quality stoma bag made recovery a struggle, but the only feedback he got was to ‘just get used to it’. The health service can overlook the fact that some patients invent things instead of just waiting. Michael started a company that now markets his solution, the ostimi-i Alert Sensor, across the EU and US. In Michael’s words, ‘Personalised medicine can’t be delivered without involving the person. Healthcare is about relationships, and technology should always serve to support them.’

Naveed and Samiya Parvez delivered this message in the most heartbreaking talk of the day. Their son Diamo was diagnosed with severe developmental delay and required orthotic support throughout his life. Orthoses are life-changing body braces, but at that time the pressures facing the NHS meant that their son had outgrown each orthosis by the time it arrived. Sadly, Diamo passed away and in his memory they started a company with a single mission: Deliver 3D-printed, medically effective orthosis within 2 weeks of a person’s need globally. The service, Andiamo, is keeping its promise and making a huge difference to patients’ lives.

4. Don’t be scared to innovate

The NHS has been widely criticised for being resistant to change and innovation. These talks demonstrate how efforts to try something new can change patient’s lives. As a Consultant Clinical Scientist and Chartered Engineer, Dr. Charlotte Kemp is no stranger to scientific research. Working with her colleague Dr. Fiona Wood, she set out to assess the performance of available devices for neonatal face mask ventilation training. It became clear to them that the market solutions could be drastically improved; four years and several prototypes later, they created the first prototype of the SMART newborn training system, eventually involving a commercial partner. The idea of sharing in-house intellectual property with commercial companies is a point of contention in some NHS trusts. However, Charlotte believes “We can give away ideas in a way that respects their value. Innovation is not the job or responsibility of someone else. Ask yourself, can I afford not to help?”

Amy Overend began with the story of Count Chiquinho Scarpa, the Brazilian billionaire who in 2013, announced he was digging a grave for his $500,000 Bentley. It started a social media frenzy and he used the ensuing publicity to make a statement: Every single day, we bury priceless healthy organs which could save lives. Amy works in neonatal intensive care where today, technology allows adults to receive organs donated from neonates with terminal illnesses. Few things are more difficult than the loss of a child, but Amy had the courage to ask, “Why don’t we offer neonatal organ donations a part of palliative care plans?”. With a fight against the current culture, she made this possible and left us with a powerful affirmation, “Don’t let someone saying ‘you can’t do’ be the reason you don’t”.

The legacy of the NHS will be defined by the way we uphold its values. Changing practice in response to new evidence is an ethical obligation. The following talks explore what this means today.

The endless pressures on medics can bring them in conflict with the profession. Imran Sajid learned that in the NHS, invention is not synonymous with innovation and he now works in health policy to reduce medical practices that cause harm. It can take up to 17 years for medical research to translate to practice and there are many examples where we have overestimated the benefits and underestimated the harm of new interventions. As Imran put it, “Everything is a nail when you have a hammer”. He ended with a quote from William Oslo who said that “medicine is the science of uncertainty and the art of probabilities.” The NHS needs individuals to embrace uncertainty, with the courage to change practices when faced with new evidence.

Chris Turner admitted that for a long time, he wasn’t respecting the complexity of the situations in which we deliver care. Research is only now proving that incivility (rudeness) has huge implications for the way health is delivered. Chris explains that “Healthcare is a team business, practised in stressful environments with varying efficacy.’’ A study in paediatrics showed that rudeness accounted for up to 52% of the difference in performance between teams and just being an observer has negative effects on cognitive ability. This evidence, taken to its conclusion, requires widespread awareness that civility saves lives. 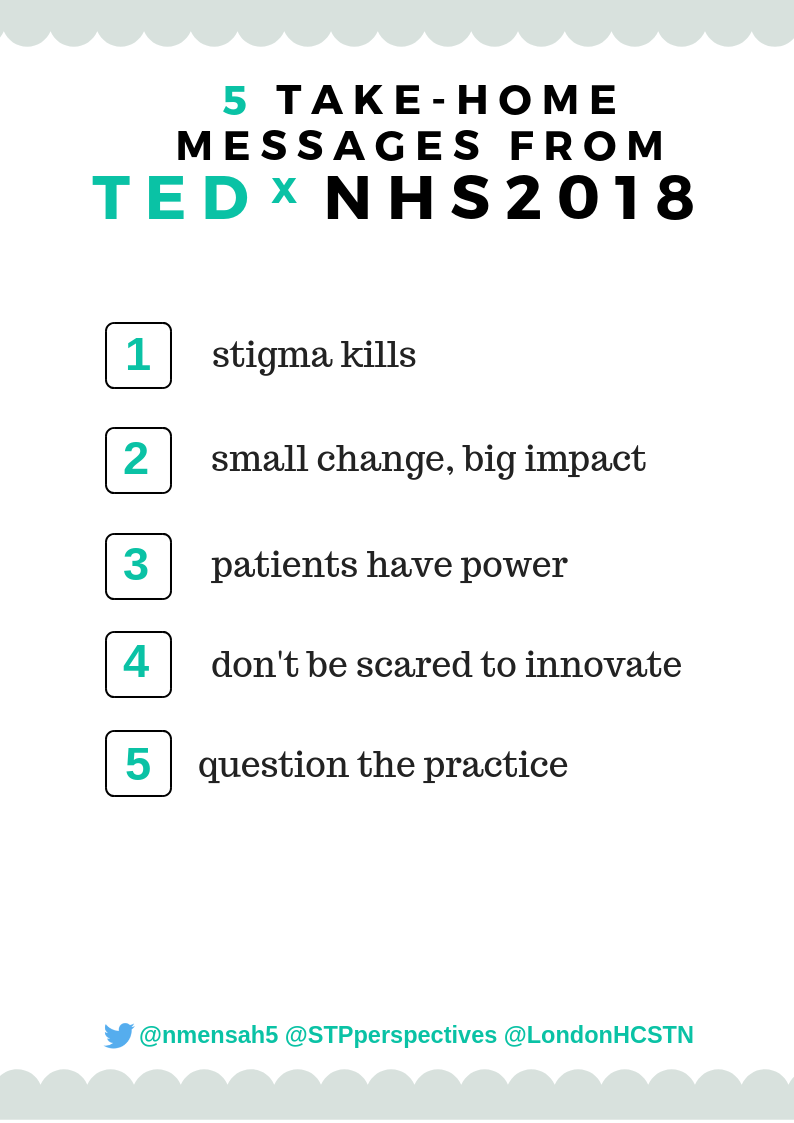 Hope you enjoyed the read and don’t forget to watch the talks when they’re out. I’ll close with some paraphrased quotes from the remaining speakers:

Dr. Hannah Barham-Brown -“Disabled people are an asset to healthcare because they get it. You don’t need wheels to be a #rollmodel”

Jackie Marshall – “[By volunteering], I learned that complaints are nothing but a breakdown of communication and trust.”

Aaron brown – “Overworking as escapism. It’s a common behaviour in the NHS….  Our health doesn’t just affect us, it affects patients, family and everyone we care about… If we fall apart, the NHS falls apart.”

Dan smith – “Our coping mechanisms are crucial but do you understand them? I learned an important lesson in the aftermath of the Manchester arena attack – ‘It’s okay not to be okay’.